Hope all the readers of this space are doing great. 🙂 😀

Since its a weekend, I have finally decided to update the blog. Honestly, I got the reason to do this post this morning itself. 🙂 Of course, there are other things to be posted as well, but laziness won in those cases. 😀

The post is about one of my society’s security guard, an old South Indian fellow. I got to know about him when I was going to the nearby market with my brother one day. Now, in places like Delhi (or other North & Central India regions for that matter), you do not expect security guards to speak in English. So, that’s why he was a bit different from the other guards in the society. My brother told me that he being a South Indian is not comfortable speaking in Hindi. He and my brother greeted each other and then, he greeted me with a smile. He had that positive smile and face that instantly gives you positive energy, instantly makes you happy. You understand the feeling, right? Some people carry that positive energy with them and spread that everywhere.

From then onwards, I used to greet him whenever I used to run into him. That’s pretty much it. But today, he came to our home for saying goodbyes. He was leaving with his parents for Mumbai, his hometown. He had that same positive smile on his face. He gave his blessings to me and my brother some twice. 🙂 Once when he greeted us and once while he was leaving. When he was opening the door to leave, he turned around and said, “Bitiya, God Bless you”. (It means Daughter, God Bless you). That is when I realized something. He looked EXACTLY like those old characters from Malgudi Days that we imagined while reading the books and the ones that we saw in the TV representation of the same. Yes, he looked EXACTLY like them. At that moment, I decided to do a post on it because anything positive and related to Malgudi Days deserves a mention, ain’t it? 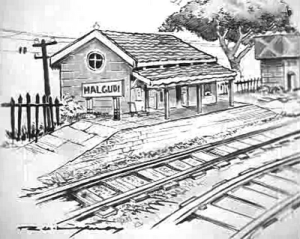 Disclaimer: All pictures taken from Google. I don’t claim any ownership.